The legendary British pop artist met Dino Gavina in the 1970s. Several were the projects and proposals that the artist sent to his entrepreneur friend, mostly remained at the prototype level.

Allen Jones is one of Britain’s most distinguished artists from the pioneering Pop Movement, with paintings and sculptures in many important international collections, including Tate Gallery and the Victoria & Albert Museum in London, the Museum of Modern Art in New York, the Musée d’Art Moderne, Paris, the Hirshhorn Museum and Sculpture Garden in Washington DC, the Museum of 20th-Century Art in Vienna, the Wallraf-Richartz Museum in Cologne, the Moderna Museet in Stockholm and the Stedelijk Museum in Amsterdam.

He represented the UK at the Paris Biennale in 1963, where he received the Prix des Jeunes Artistes. In 1978 – 79 there was a painting and sculpture retrospective of his work at the Walker Art Gallery, Liverpool and the Serpentine Gallery, London and in 1995 there was a retrospective exhibition of his complete graphic works at the Barbican Art Gallery in London, which for three years toured the world under the auspices of the British Council.
In 2007-8 solo exhibitions of his work were exhibited simultaneously at Tate Britain and The Royal Academy of Arts. To mark his 75th birthday in 2012 a large, retrospective exhibition, “Off the Wall”, exhibiting sculptures, paintings, prints and drawings from the past 55 years of his career, toured through Europe, with further venues in South America through 2015. A Royal Academy of Arts retrospective 2014-2015 presented his work on thematic lines.

Commissions have included large scale mural projects for Fogal in Basel and Zurich, and two major London restaurants; monumental steel sculptures for London Bridge City, the Chelsea and Westminster Hospital, London, Taikoo Place in Hong Kong and Glaxo SmithKline world headquarters, London. In 2006 he installed 10 meters high sculpture commissions for the Yuzi Paradise Sculpture parks in both Shanghai and Guilin, China. Two large works have been acquired by the city of St Louis, USA and the Barada Foundation in Lisbon. In 2019 a monumental painted steel sculpture was erected on the Greenwich Peninsula development.

In 2008 a large-scale, 5-piece sculpture was commissioned and installed at Chatsworth in Derbyshire, and a suspended piece has been installed at the headquarters of Allen & Overy in Spitalfields in a Foster & Partners-designed building. Additionally, he has undertaken many private sculpture commissions in the UK and the USA.

Allen Jones was elected a Royal Academician in 1986, and was a Trustee of the British Museum from 1990 to 1999. In 2007 he was awarded an Honorary Doctorate of Arts at Southampton Solent University.

In the 1970s Allen Jones met the Bolognese entrepreneur Dino Gavina and between the two began a deep relationship of friendship. Several were the projects and proposals that the artist sent to his friend, mostly remained at the prototype level. In the new course of Paradisoterrestre the collaboration with Allen Jones finally takes shape in Shoe screen (2022). 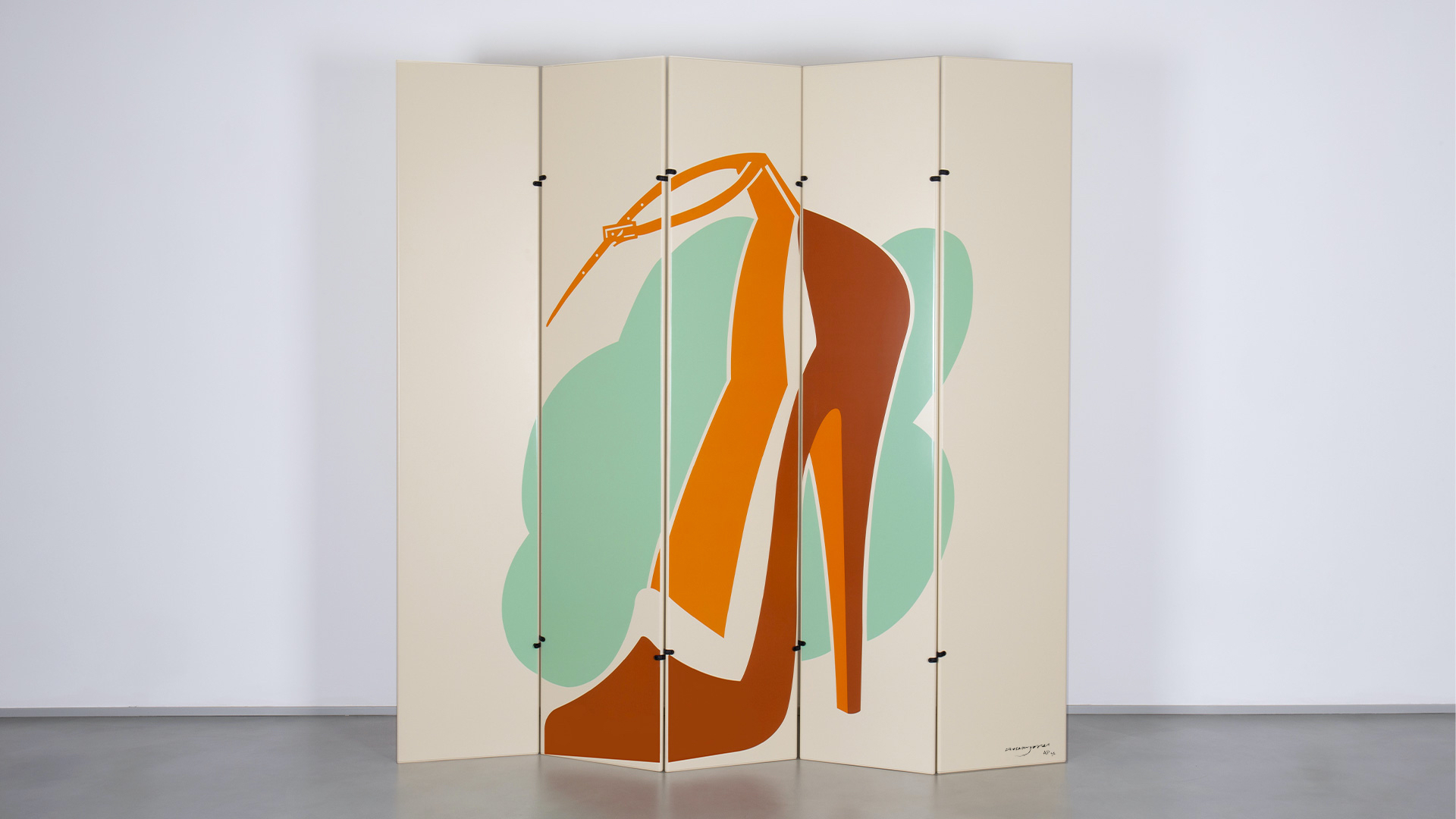