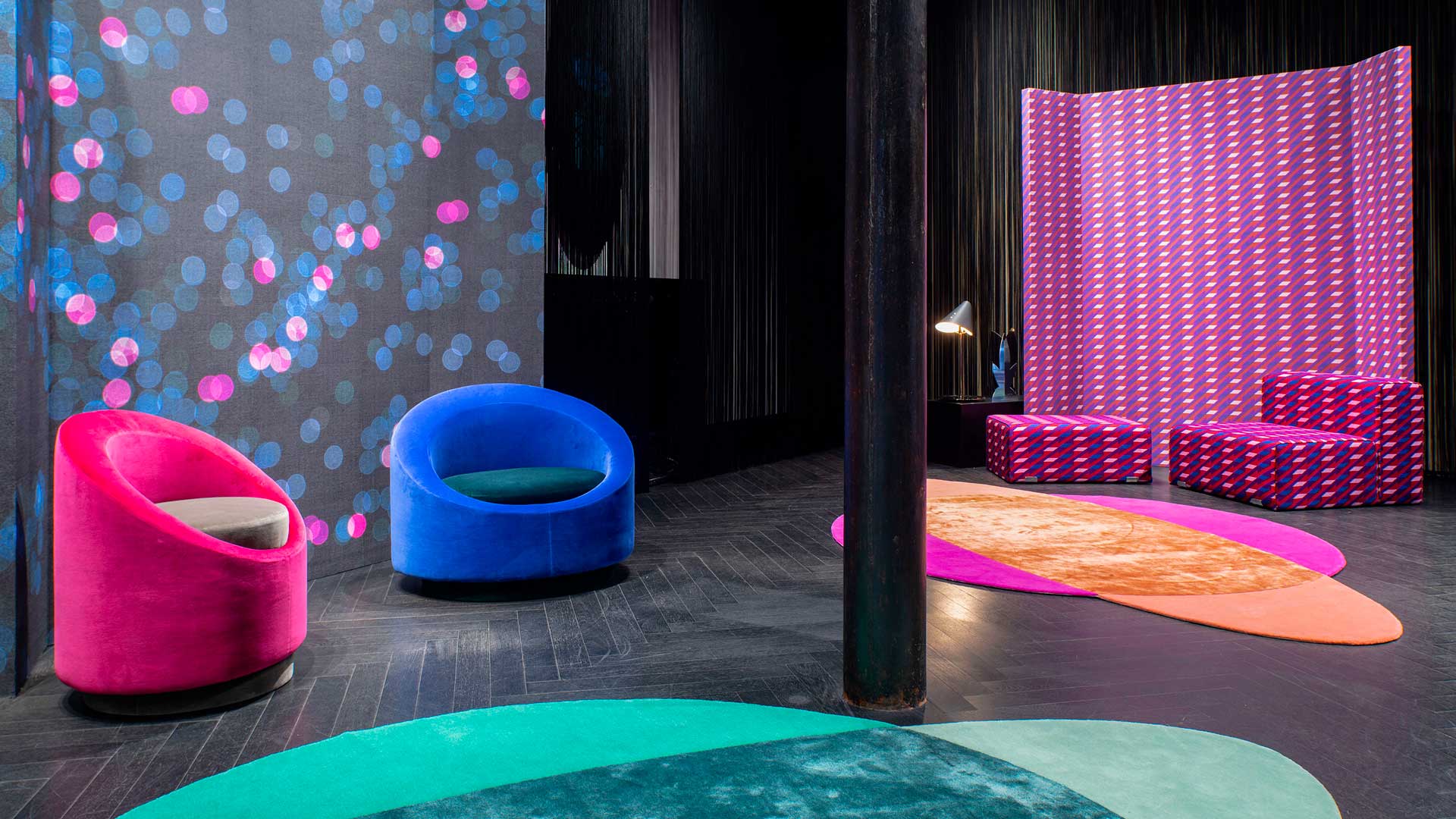 After last year’s success, the historic brand returns to Milan Design Week 2018, presenting important re-editions by Kazuhide Takahama and Novello Finotti, together with a new collection designed by Pierre Gonalons.

Paradisoterrestre, a brand created by the eclectic Dino Gavina, which returned to the limelight at the last Design Week, driven by Gherardo Tonelli‘s great passion for design and art, presents a new collection on the occasion of the 2018 Fuori Salone, in addition to some revivals of historic pieces. This year, the Porta Venezia space will be transformed into a 1970s club, thanks to a partnership with the Texturae wallpaper company.

The space in Via Sirtori 32/A will host: a re-edition of the Marcel seating system, a clear tribute to his friend Marcel Duchamp, designed by Kazuhide Takahama and produced in 1965 by Dino Gavina; a limited edition of the seat entitled Fausto, created by the artist Novello Finotti, who participated in the 1971 Ultramobile operation and a new collection of seats and rugs, named All Around, by the French designer Pierre Gonalons.

The Marcel collection, developed in 1965 by Kazuhide Takahama, represents a new modular seating system based on an infinite number of possible spatial combinations which goes beyond the traditional definition of furniture. Inspired by the elementary shape of the pouf, Takahama conceived a series of complementary elements that combined functional and figurative needs, reworking both the shape of the seats, formed by large blocks of shaped polyurethane, and that of the aluminium supports. The goal of the Japanese designer was the pursuit of lasting quality and a timeless original shape. Paradisoterrestre will present two variants of the Marcel on the occasion of the MDW2018: the classic version, with Kvadrat removable wool fabric covering, and a limited edition in Futurists fabric, designed by Pierre Gonalons in collaboration with the French company Pierre Frey. This fabric is inspired by a mix between the dynamism of the Futurist movement and the graphics of kinetic art, artistic periods very dear to Gavina.

The Fausto, a small bronze seat with a humanoid presence, is the work of artist Novello Finotti. It is an exemplary representation of the Ultramobile concept created by Dino Gavina in 1971, which is rooted in the idea of a surrealist reinterpretation an object of daily use and of transferring a strong sense of irony into the home environment. The work is presented in a limited edition of 100 copies, individually marked with the artist engraved signature.

The All Around collection, which followed The Other Side, designed by Pierre Gonalons for Paradisoterrestre, consists of a chair, an armchair and two- and three-seater sofas, as well as a carpet available in three different colours. The Gonalons seats, inspired by the revolutionary creations devised for Gavina by the Japanese designer Takahama, are extraordinary examples of simplicity, innovation and elegance that attempt to apply his teaching, also incorporating a subtle reference to the myriad columns that characterize the city of Bologna and support its famous city porticos. The seats are framed on a polyurethane foam base, a wooden plywood backrest and are upholstered in Kvadrat cotton velvet. The All Around carpet, in silk and bamboo wool, appears as an optical play of colours on oval and spherical shapes and evokes a tribute to Gavina’s work of the 1970s, which ranges between surrealism and pop art.

The Paradisoterrestre Movie, a collection of interviews, testimonies and historical material, will be shown in the Porta Venezia space, illustrating past and present moments of the Bologna brand.

In addition, last year’s Fuori Salone revivals will be on display: the Garbo lamp designed by Mariyo Yagi in 1973; Kazuhide Takahama‘s ceramic work entitled Elmo, the 1958 Naeko three-seat sofa and armchair, and the Mantilla sofa; Gavina’s dual tribute to Man Ray, with the Lips and Venus mirrors; the Rue Férou table lamp, designed by Man Ray in 1972 and produced by Gavina.

Visitors can also view The Other Side collection by Pierre Gonalons, consisting of mirrors, marble furniture and carpets; the Murano glass vase Altabella 23 – Bringing Water to the Sea, a work by the Calori & Maillard duo inspired by the architecture of the historic Gavina store in Via Altabella 23 in Bologna, designed by Carlo Scarpa in 1960.